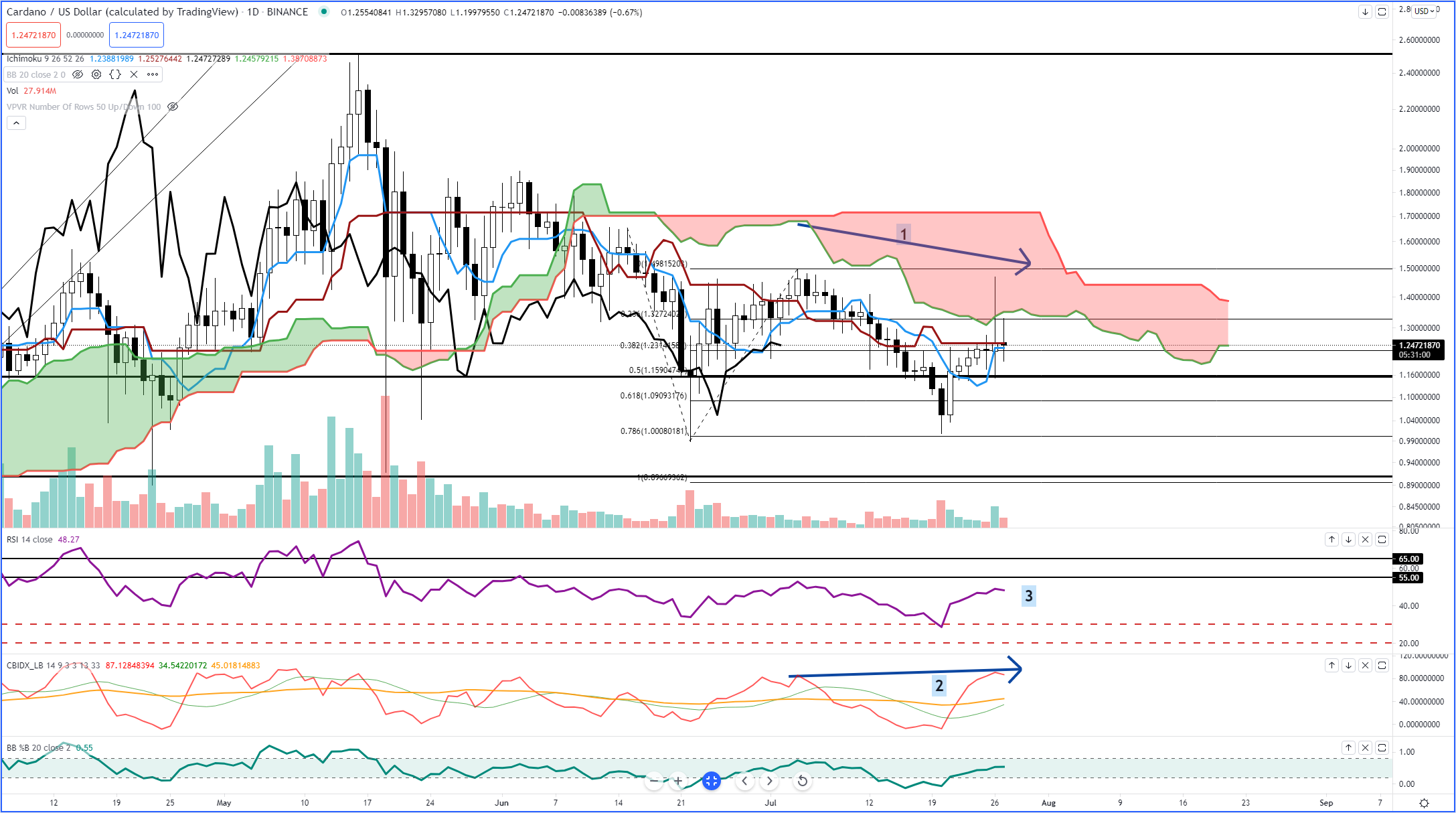 Cardano, like Bitcoin, had an amazing performance on Monday… until it sold off nearly all of the gains. At one point, Cardano printed a nearly +20% gain (+19.56%), only to retrace nearly all of that movement to close slightly higher with a +2.07% gain. During today’s trade (July 27th, 2021), traders again attempted to push Cardano higher, but were stalled out. After nearing a +6% gain it is now, at the time of writing this article (1410 EST), down -1.07%. A major contributing factor to the selling pressure is the existence of a bearish continuation pattern known as hidden bearish divergence. Hidden doesn’t mean ‘hard to see or hiding’ – it’s more like a hint or a warning that the current bullish price action will likely terminate and resume the broader bearish trend. Hidden bearish divergence occurs when the price chart shows lower highs/closes while an oscillator like the Composite Index prints higher highs. #1 on the price chart shows the descending highs while the #2 on the Composite Index shows the rising peaks: hidden bearish divergence. The likelihood of continued selling below $1.00 value area is reinforced by the presence of some major resistance levels. First, bulls were slapped down lower at the bottom of the daily Cloud today and yesterday. Second, the hidden bearish divergence occurs as the RSI tested the first overbought level in a bear market at 55 and is now sloping lower (#3). I expect to see a fairly strong drop back down to $0.9795. However – I do maintain that moment the daily chart has a daily close above the candlesticks, we are probably looking at a new bull run – but for now it remains bearish. 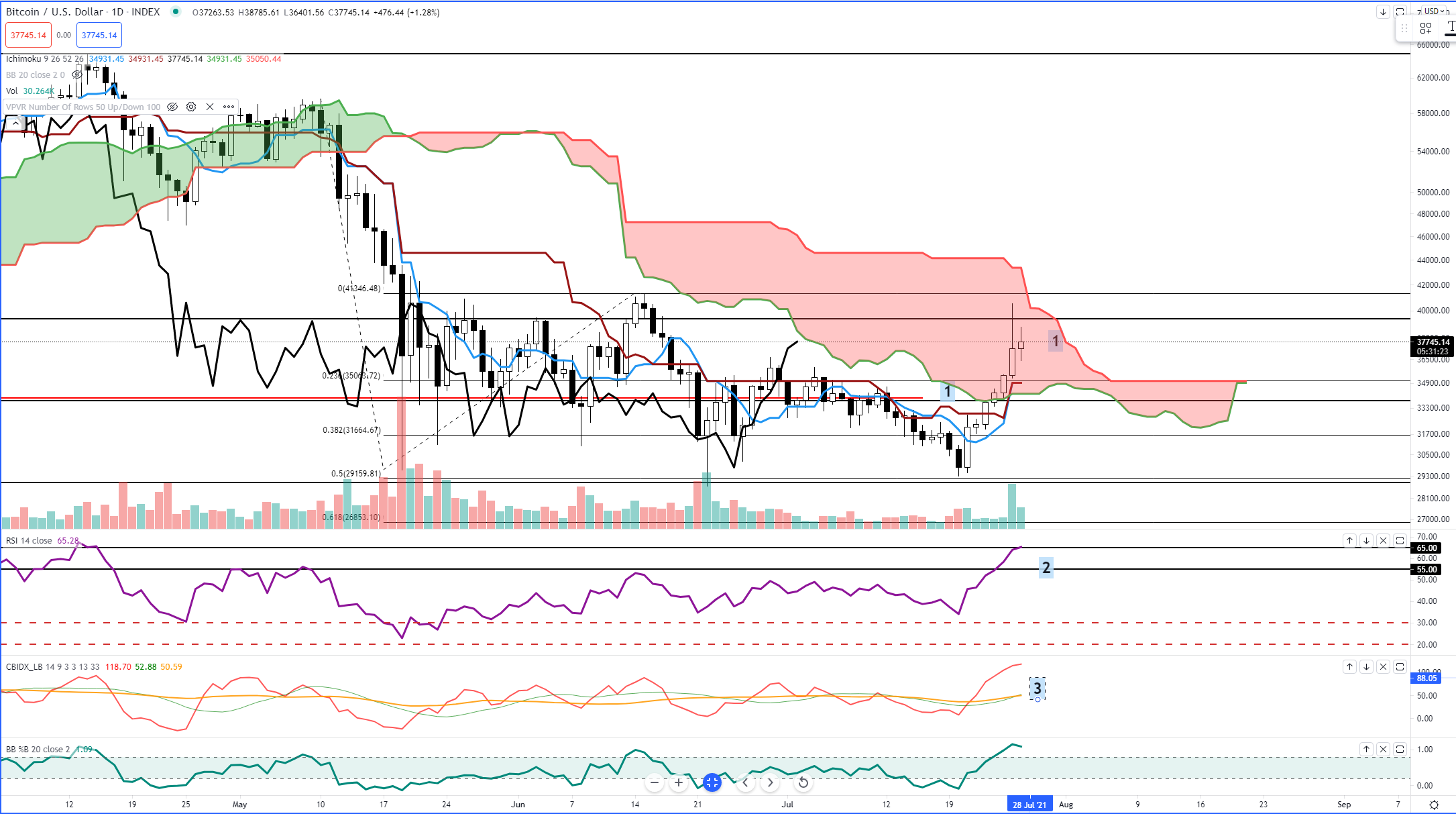 Bitcoin had one heck of a run during the Monday trade session (July 26th, 2021) – but it sold off the great majority of its intraday gains. Almost the exact same conditions present on Cardano’s chart are present on Bitcoin’s chart. The current daily candlestick shows an inside bar forming inside the Cloud (#1). A quick note about trading an instrument inside the Cloud: don’t. The Cloud is a place I affectionately call: “The Place Where Trading Accounts Go To Die.” The Cloud represent indecision, volatility, whipsaws, misery, tears, depression, madness, insanity, and pain. How many people today are wondering why Bitcoin, after a breakout above resistance, isn’t moving higher? There’s a lot of reasons, but I think the best illustration is between the hidden divergence on the daily chart (not shown, but almost exactly the same as Cardano’s) and the RSI (#2). In a bear market, the two overbought levels in the RSI are 55 and 65. It is no coincidence that as hidden bearish divergence developed, momentum higher has disspated right on top of the RSI hitting the last overbought level at 65. I am expecting a fast return to the $28,516.41 level. BUT – and this is a big but – Bitcoin’s Laggin/Chikou Span is above the candlesticks and the current price level, while inside the Cloud, could very easily breakout above the Cloud, thereby negating a significant amount of the bearish conditions. This is a good place to just sit an watch, at least that’s why I plan on doing for a few days.

Save money on your currency transfers with TorFX, voted International Money Transfer Provider of the Year 2016 – 2020. Their goal is to connect clients with ultra competitive exchange rates and a uniquely dedicated service whether they choose to trade online or over the telephone.
Find out more here.

Viable Cryptocurrencies to Own – CryptoMode