Digital.com recently surveyed 1,000 U.S. business owners to see what their plans were for implementing crypto payments, and found that nearly one in three say they plan to work with Dogecoin in the near future.

The meme-based cryptocurrency Dogecoin spiked late last year when Tesla and SpaceX CEO Elon Musk announced that customers would be able to use it to buy certain Tesla products. Tesla is certainly not the first major company to accept payments in crypto, with companies like Microsoft, AT&T, and Twitch allowing customers to either pay directly in crypto or go through third-party apps.

It’s all well and good for corporations to accept cryptocurrency, but what about smaller businesses? Digital surveyed 1,000 U.S.-based business owners to see if they plan to follow suit or eschew the crypto fad altogether.

27% of Business Owners Will Start Accepting Cryptocurrency This Year 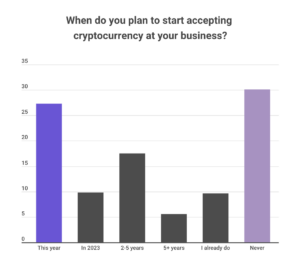 Nearly One in Three Say They Will Never Accept Cryptocurrency

The largest percentage of respondents (30%) actually said that they never plan to accept cryptocurrency. This may be because they see it as too big of a project to implement or believe that the crypto bubble may finally burst.

29% of Business Owners Say They Will Accept Dogecoin

This survey was commissioned by Digital.com and conducted online by the survey platform Pollfish between January 11 and January 12, 2022. In total, 1,000 participants in the United States were surveyed. All participants had to pass through demographic filters to ensure they were self-employed business owners.