Everyone knows the Shiba Inu (CRYPTO:SHIB) story: In a wild frenzy of speculative buying, the cryptocurrency exploded in value in late October of 2021, registering mind-boggling gains. Of course, the token’s value has since crashed from its heights, leaving many investors (including yours truly) with little to show for their zeal.

Investors that are tired of losing money on cryptocurrencies like Shiba Inu, don’t have to look further than the healthcare sector to find a wealth of better investments. Compared to Shiba Inu, the two companies I’ll discuss today have a clear path toward further growth by simply continuing to execute on their business model. They also have an abundance of financial and competitive factors keeping their prices well-grounded in the present, which can’t be said of the joke-fueled coin, so let’s dive in and take a look. 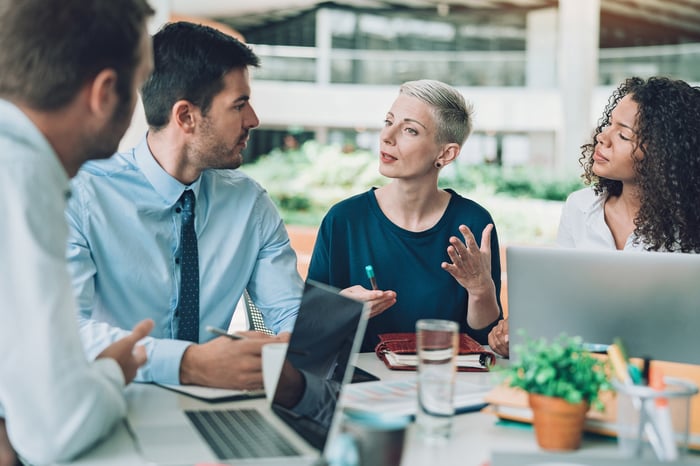 For anyone who has had braces and wished they didn’t, Align Technology (NASDAQ:ALGN) could have been a better solution.

The company profitably sells the Invisalign brand of teeth straighteners as well as dental imaging systems that orthodontists can use to perform restorative dentistry. It’s a better investment than Shiba Inu because its business has been, is, and will continue to be booming.

In 2021, it brought in net revenue of $4 billion, which is just shy of 60% growth compared to 2020. Sales of its imaging systems led the pack, with strong demand driving a 90.4% increase year over year. That’s key, as each imaging system sold implies additional recurring revenue over time in maintenance contracts and software subscriptions.

To keep up these results moving forward, all Align needs to do is to keep penetrating its international markets. It has a 10% share of the global market for teeth straighteners, 54% of which is concentrated in the Americas. The Asia-Pacific region will be the center of future growth, and the company has already seen a 1,200% increase in the number of website visitors from major markets like India.

With consumer interest like that, it won’t take much else for the stock to outperform Shiba Inu this year.

Intuitive Surgical (NASDAQ:ISRG) makes robotic surgical technology, including the legendary Da Vinci surgical suite. Like Align Technology, Intuitive is a canonical growth stock that’s profitable, is expanding consistently, and has a strong recurring base of revenue.

For every Da Vinci suite sold, the company can expect a drumbeat of income from sales of software packages, maintenance contracts, replacement tool heads, and other consumable necessities. In the fourth quarter, sales of these accessories brought in $843 million, and sales of surgical units were worth $470 million. As a result, total revenue grew by 17% in Q4, bringing Intuitive to a grand total of $5.7 billion in trailing revenue.

More procedures are being performed using Da Vinci units every year, which means that demand for consumables will be rising. Plus, there’s a low risk of losing customers to the competition. When Intuitive sells a Da Vinci system to a hospital, the surgeons using the system need to be trained, thereby imparting a sunk cost which makes it harder to justify switching to another solution.

Notably, there’s nothing comparable that would lock a user into the Shiba Inu ecosystem to preserve the coin’s long-term value.

In the future, Intuitive plans to keep producing new robotic tools and platforms to sell to new and existing customers. It’ll also work on its software platforms, which are instrumental in helping surgeons learn how to maximize their performance and reduce errors.

Finally, the last reason why Intuitive Surgical is a better option than Shiba Inu is that it’s an investment in progress. As cool as a digital currency based on a joke might be, it isn’t going to make products that help doctors to save people’s lives.