Home Cardano Amazon to accept Bitcoin as payment by the end of 2021, Ethereum...


E-commerce giant Amazon aims to accept payments in Bitcoin by the end of 2021, shortly after posting a job opening for a cryptocurrency and blockchain lead.

Amazon to accept the most popular digital currencies

An insider familiar with the matter reportedly told City A.M. that the fourth largest company in the world, Amazon is looking to accept Bitcoin payments by the end of the year and possibly venturing deeper into the digital asset industry.

The anonymous source added that while integrating cryptocurrencies as part of a payment option is the first step, the internet giant’s digital asset ambitions do not stop there. The insider said:

This is a full-on, well-discussed, integral part of the future mechanism of how Amazon will work.

According to the source, Bitcoin would be the first cryptocurrency accepted. Still, the corporation is determined to add other popular digital currencies in the future, including Ethereum, Cardano and Bitcoin Cash. The insider suggested that this was a decision made from the top of the organization, referring to founder and executive chairman of Amazon, Jeff Bezos.

The insider further suggested that the process to roll out digital currency payments will not take long since this has been in development since 2019.

As part of the e-commerce giant’s plan of delving into the crypto industry, Amazon also aims to create its own cryptocurrency, which could come to fruition as early as 2022.

This development comes after Amazon recently published an advertisement for a cryptocurrency and blockchain lead job opening. According to the description for the position, the talent would need to develop the firm’s digital currency strategy and product roadmap.

Bitcoin price has reversed the period of underperformance, recording a 35% recovery from its swing low on July 21.

Bitcoin price broke out of the hypotenuse of the prevailing descending triangle chart pattern, confirming accelerating interest, which could effect the measured target of a 28% climb from the breakout. Should Bitcoin price continue to be buoyed by the bulls, BTC could reach $42,961, coinciding with the 50% Fibonacci extension level.

Bitcoin price needs to overcome the 38.2% Fibonacci extension level at $39,608, corresponding to the resistance line given by the Momentum Reversal Indicator (MRI) and the 100-day Simple Moving Average (SMA) that acts as obstacles for BTC. Further bullish momentum could see the leading cryptocurrency tag the 200-day SMA at $44,611 and even the 61.8% Fibonacci extension level should buying pressure increase. 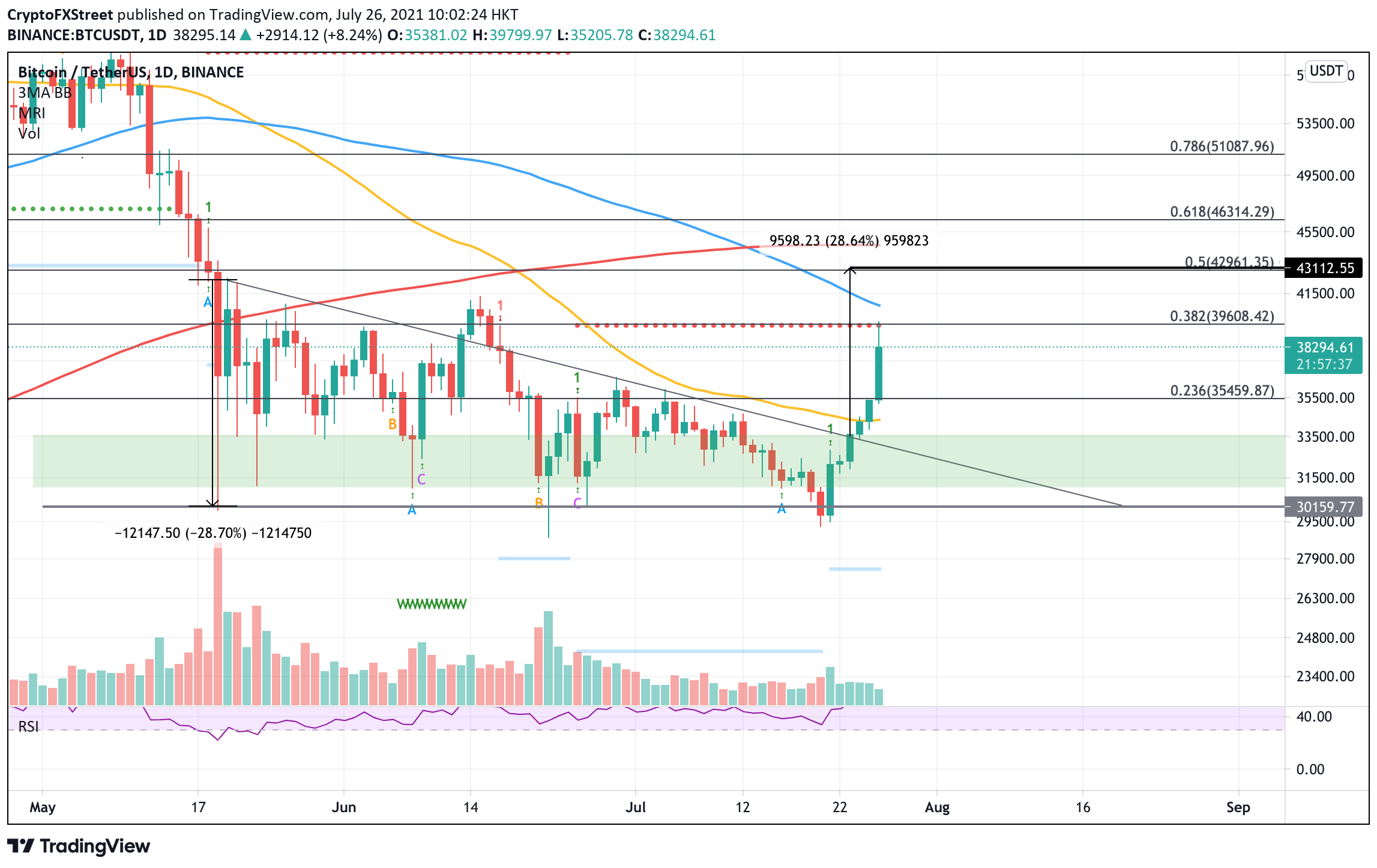 If selling pressure spikes, Bitcoin price could find itself back in the demand zone that extends from $31,039 to $33,591.