Dogecoin (CRYPTO: DOGE) co-creator Billy Markus joined Benzinga’s “Moon or Bust” last Friday to discuss the cryptocurrency. Among other topics, Markus spoke about Dogecoin’s underlying statistics and why he believes adding a supply cap would have a detrimental effect.

“Let’s say the coin was capped today. That means it wouldn’t give any mining rewards, that means people probably wouldn’t waste their CPU cycles mining it, which means it wouldn’t be a secure coin. And, if it’s not secure, because someone can take over the network with a large amount of hashing power, that would make the value of the coin nothing,” Markus said.

The co-creator also pointed to the importance of Dogecoin’s increasing utility as part of what makes the cryptocurrency legitimate.

“People can use Dogecoin to purchase pretty much anything at this point,” Markus said, before adding “I think it’s very, very beneficial for businesses to accept Dogecoin and for the currency to be moved around and used as a currency.”

There is definitely sustained hype around Dogecoin and since putting in a triple bottom at the 16-cent level Dogecoin has been a very good boy.

The Dogecoin Chart: On July 21, Dogecoin broke through a descending trendline that had been holding it down since June 6. The crypto was putting in lower highs and lower lows in a downtrend but when it failed to close below the 16-cent level bullish volume came in Dogecoin reversed course.

Since July 22, Dogecoin has been trading in an uptrend on the daily chart in a tight range between about 18 and 23 cents. There is a support level slightly above the 20-cent mark and on Monday and Tuesday, Dogecoin was able to close the day above the level, which is a good sign for the bulls.

On Wednesday afternoon, Dogecoin was printing a doji candlestick which can indicate a reversal is in the cards. The doji paired with Dogecoin’s huge daily volume indicates a big battle between the bulls and the bears is playing out. Bulls want to see Dogecoin close the day above the 21-cent level which would turn the candlestick into a bullish hammer.

Dogecoin is also trading above the 200-day simple moving average which indicates overall sentiment in the stock is bullish. The 200-day SMA has acted as a support level for the last eight days and may continue to guide the stock higher. 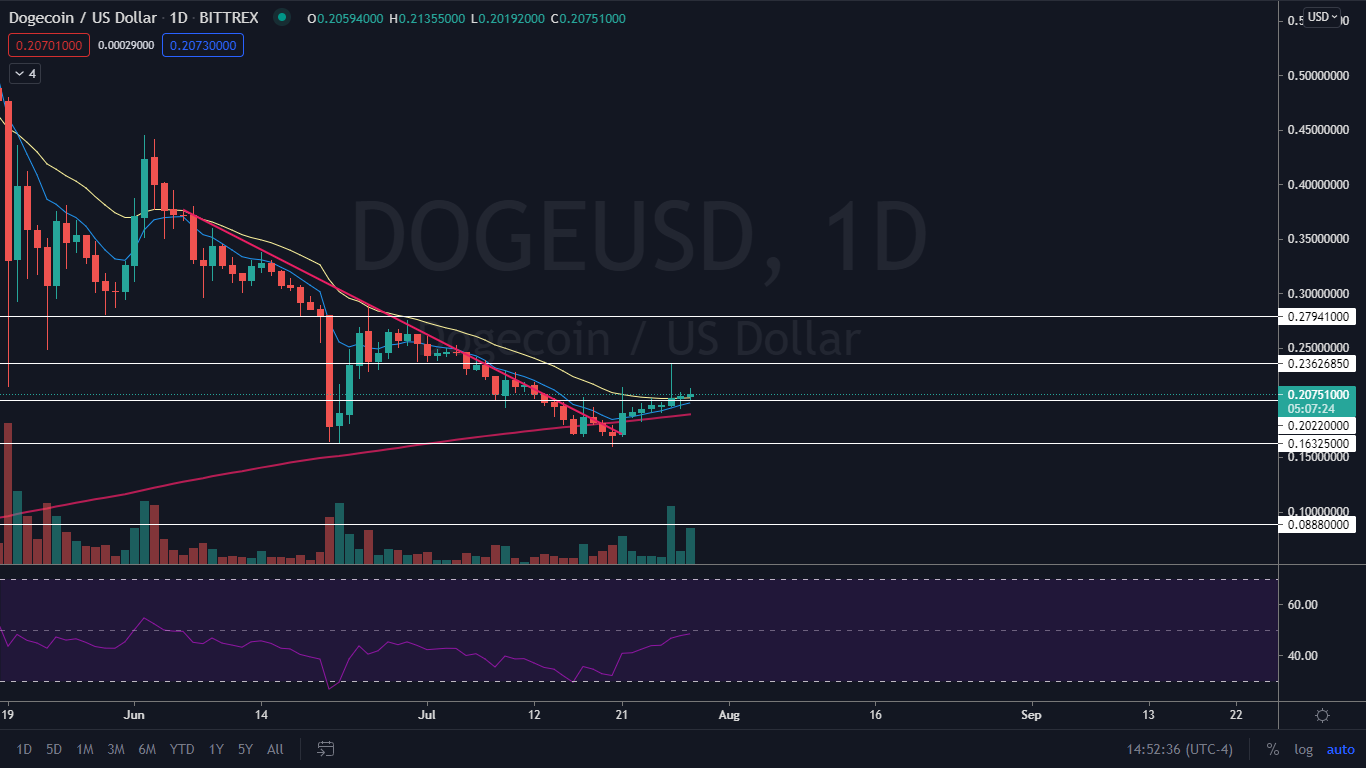