Dogecoin price has appeared to have shown a technical pattern that suggests a bearish forecast, with a target of nearly 20% in favor of the bears. DOGE is little room to move on the upside, with a great deal of resistances obstructing any bullish momentum.

Dogecoin price has formed a head-and-shoulders pattern on the 4-hour chart, suggesting that DOGE is expecting a move to the downside.

If the pattern is robust, it can be used to anticipate price moves. The governing chart pattern offers a bearish outlook, and DOGE anticipates a massive sell-off.

The targeted move for Dogecoin price appears to be 19% by calculating the distance between the head and the neckline.

As a result, DOGE could fall to the measured target of $0.163, a 19% decline from the neckline should selling pressure increase.

However, Dogecoin price is currently supported by the 100 four-hour Simple Moving Average (SMA), which acts as a critical line of defense for DOGE. 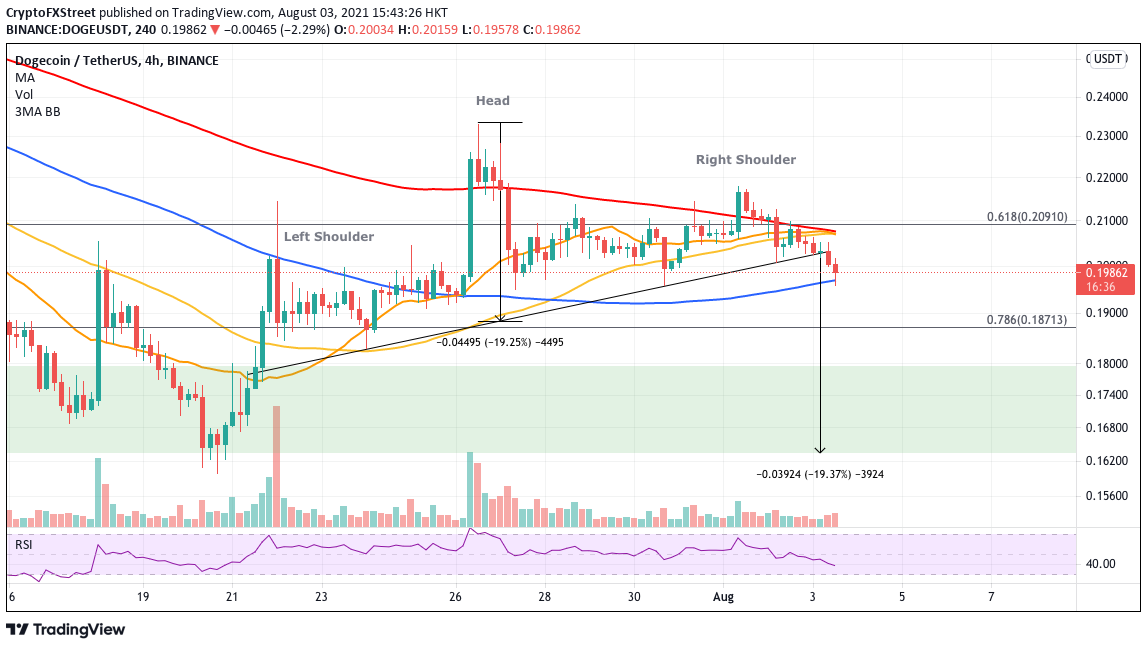 Should the canine-themed token slice through the 100 four-hour SMA at $0.196 and close below this level, this could spell trouble for the bulls, forcing Dogecoin price to search for support at the 78.6% Fibonacci retracement level at $0.187.

If buyers do not step in at this level, Dogecoin price could fall further into the demand zone that starts at $0.179 before eventually reaching the lowest target given by the prevailing chart pattern at $0.163.

On the flip side, should Dogecoin price decide to effect the reversal of fortune by recovering back above $0.204, the upside potential for DOGE still appears to be quite limited.

The 20 four-hour, 50-hour and 200-hour SMAs all suggest that the token would see tremendous resistance at $0.207, just slightly below the 61.8% Fibonacci retracement level.

The Intotheblock In/Out of the Money Around Price (IOMAP) data shows that a massive obstacle is awaiting Dogecoin price, where 53,760 addresses bought 11.37 billion DOGE at $0.207.

It will take compelling upside release for Dogecoin to reverse the period of underperformance and to retest the July 26 high again at $0.233.