Bitcoin (BTC) price climbed back above $45,000 from a daily low of $42,848 to record a new two-month high of $46,000 on several crypto exchanges. The price rise came after an early morning slump which many attributed to the uncertainty around the $1 trillion US Infrastructure bill.

The crypto taxation proposal especially the last-minute amendment by Sen. Rob Portman and Mark Warner had everyone at the edge of their seats during today’s discussion. However, there was no fruitful outcome and an unchanged bill without the amendments would go for a vote again on Tuesday after the 30-hour rule was imposed.

The Senate has voted 68-29 to end debate. We wanted a vote on the Wyden amendment first, or on a Wyden-Warner compromise, but no luck.

The Senate has to wait until Tuesday to do a final vote. They might still amend the bill before then. https://t.co/VFrmnZqOPQ

Even as the fate of the bill hangs in balance, the crypto market seemed to have overcome whatever little ambiguity it created this morning. Bitcoin rose to a new two-month-high and looks set to test $50K soon, while ETH also managed to move above $3,100 after falling below $3K during the morning Asian session.

After nearly 3-months of consolidation under $40K and losing more than half of its market cap, the top cryptocurrency looks to be back on its bullish way. Bitcoin managed to reclaim 200-day Moving Average for the first time since May when the crypto market lost more than 50% of its valuation. The top cryptocurrency moved out of the $30K-$40K range in the first week of August and now looks to continue its bull run again.

The fear and greed index, a market metric that indicates the market sentiment reached 65 signalling greed among traders. Until July the value was moving in the extreme fear zone often falling below 10. 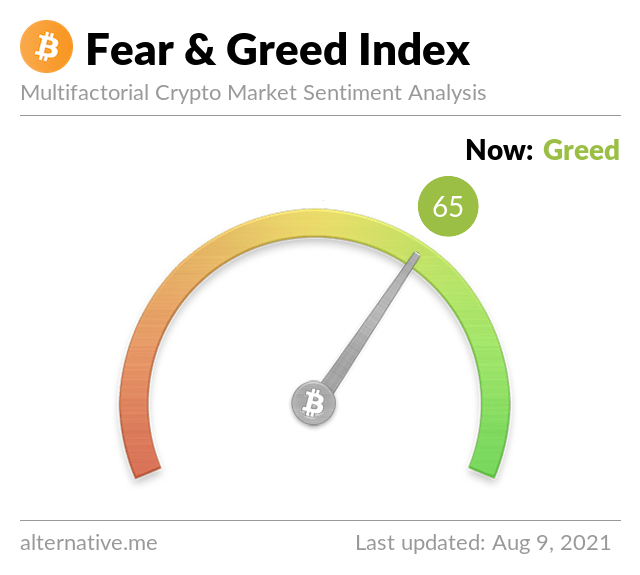