The total market capitalization is nearing the $2 trillion mark as bulls make a comeback into the crypto market. According to CoinMarketCap Data, the total crypto market cap stood at $1.85 trillion as of press time.

With most cryptocurrencies battling pivotal resistance zones after beating out bears lower down in a broad market rebound, the possibility of a shallow dip stands. However, this may be regarded as a re-entry point into the bullish market. At the time of writing, Bitcoin was seen trading at $45,800

Bitcoin (BTC)
On Tuesday, the U.S. Senate passed its bipartisan infrastructure bill to the House of Representatives Tuesday after a 69-30 vote. The bill, which dedicates $1 trillion to infrastructure improvements over the next 10 years including nearly $550 billion in fresh spending, drew attention from the crypto community due to a “pay-for” that anticipates raising $28 billion from a widened crypto tax provision.

Crypto analyst, Rekt Capital remains bullish saying ”#BTC confirmed the breakout with a 4HR close above the Ascending Triangle” while stating: “The new BTC Golden Cross is only 3 days away.”

XRP (XRP)
The legal tussle between the U.S SEC and Ripple continues, with the agency demanding further access to Ripple’s internal communications. The SEC had filed a motion on Monday, requesting Judge Sarah Netburn to order Ripple to produce and submit its employee messaging on business communication platform Slack.

Ripple subsequently filed a request to extend the deadline to respond to the SEC’s motion regarding the Slack communications from Thursday, Aug. 12, to Monday, Aug. 16. Amid all this, crypto exchange, KickEX announced it will be listing XRP on August 11. XRP was trading at $0.83 as of press time.

Helium remains one of the few “real-world” Web 3 projects tapping token-powered incentives to bolster growth. The network uses LoRaWAN technology to connect devices to the internet and presently has over 100,000 hotspots. As of press time, Helium was trading at $16.97, gaining 16.27% in the last 24 hours.

Ravencoin (RVN)
Ravencoin is among a trio of Bitcoin forks that seeks to break large mining rigs and operation monopolies as it makes it easy for anyone to mine, even with a standard GPU. 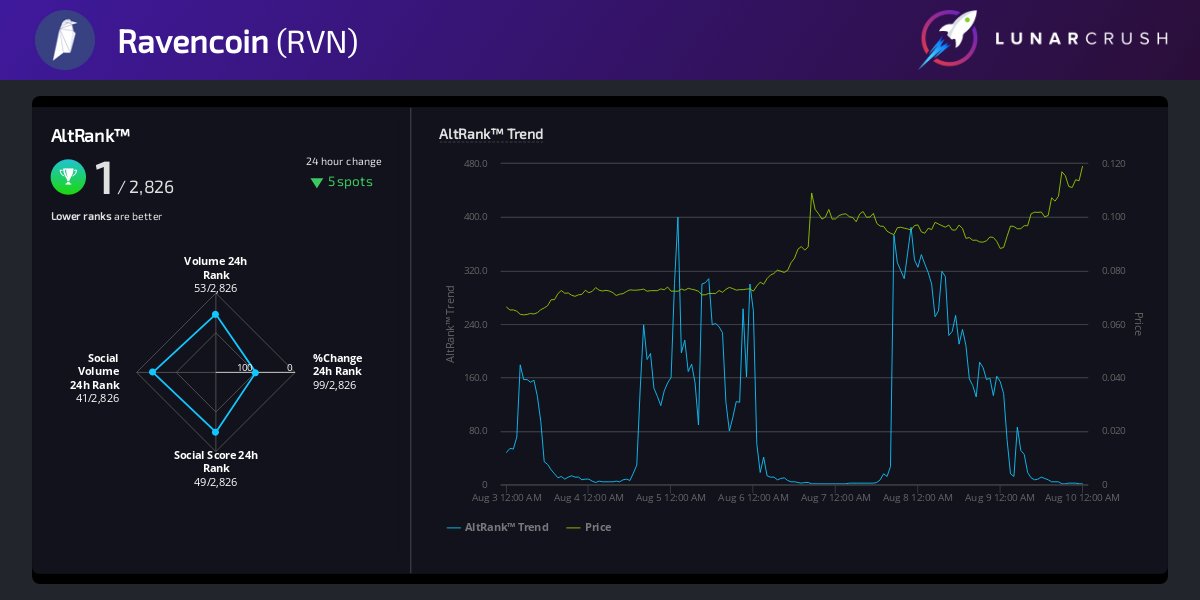 RVN has been on the rise recently, stemming from considerations in mining profitability. At the time of writing, Ravencoin’s price has increased nearly 20% over the last 24 hours to $0.136. On a 7 day basis, RVN experienced an uptick of over 90%, reaching highs of $0.147 on August 10. As a result, Ravencoin’s social engagement has grown significantly as indicated by LunarCrush.

IoTeX (IOTX)
IoTeX (IOTX) is an Ethereum token that powers IoTeX, a platform that aims to connect IoT devices (such as cameras and sensors) and decentralized applications. Following the announcement of the Coinbase Pro listing, IOTX rose from lows of $0.0276 on August 10 to highs of $0.057, gaining nearly 111%.

Notably, IoTeX highlighted more than 600% growth in wallets and network activity in July with the cross-chain ecosystem expanding with over 20 assets drawn from Ethereum, Binance Chain, and Polygon.

”Transfers for IOTX, ORN, QUICK, TRIBE & UST are now available in the regions where trading is supported. Traders cannot place orders and no orders will be filled. Trading will begin on or after 9 AM PT on Wed August 11, if liquidity conditions are met”.