The more than 1,400 per cent jump in ADA over past year exceeds returns from both Bitcoin and Ether

A little-known digital token linked to the Cardano blockchain has just become the third-largest virtual currency in the world as network developers look to ride the boom in decentralized finance. With the so-called ADA cryptocurrency jumping around 50 per cent over the past week alone, optimism is rising that new technological enhancements will allow smart contracts on Cardano by its announced goal of September 12. That will enable its network to offer lucrative services like DeFi, where Ethereum currently dominates.

In a rally met with skepticism by some big industry names, the ADA token now has a market value of more than $69 billion — bigger than all rivals except Bitcoin and Ether, according to tracker CoinGecko.

“The Cardano aficionados have been awaiting — some impatiently — for what seems like an eternity for some news on smart contracts,” said Antoni Trenchev, managing partner and co-founder of crypto lender Nexo. “Cardano is tussling with no. 2 crypto Ethereum to be the preeminent blockchain offering smart contracts.”

The more than 1,400 per cent jump in ADA over the past year exceeds the returns from both Bitcoin and Ether.

The virtual coin has climbed despite skepticism about its utility from some prominent cryptocurrency commentators. For instance, Galaxy Digital LP Chief Executive Officer Mike Novogratz posted on Twitter on Sunday that “I spoke to twenty of the smartest people I know in the space, and zero of them saw Cardano having traction” with developers. 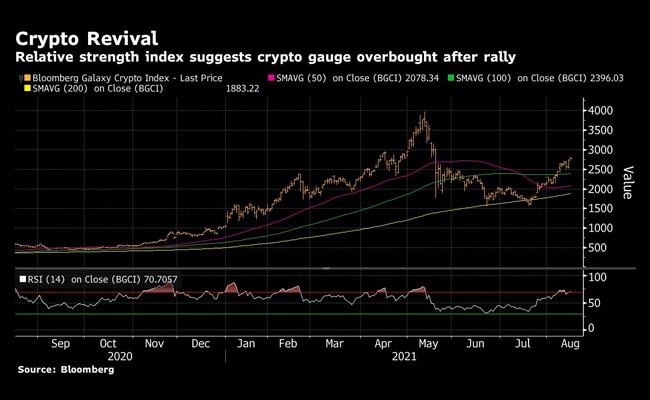 “Most people outside crypto have never even heard of Cardano — yet here it is with a market cap” that tops many S&P 500 index constituents, Mr Trenchev said.

Decentralized finance — or DeFi — ports financial functions onto digital ledgers, allowing people to do things like lend or borrow funds and earn interest in a savings-like account without the need for traditional intermediaries such as banks. Its growing popularity is part of a wider trend of increased blockchain usage.

Recent rallies in Bitcoin, Ether, ADA and other tokens helped the cryptocurrency market vault past $2 trillion in value over the weekend for the first time since May, when the famously volatile sector succumbed to a rout.

(Except for the headline, this story has not been edited by NDTV staff and is published from a syndicated feed.)