Home Dogecoin First a Meme, Then a Cryptocurrency, and Now an $80 Billion Brand?...


What first started as a meme featuring a fluffy dog with poor grammar has now resulted in a trademark fight over the ownership of an estimated $80 billion brand. If the progression of this Internet sensation has left your head spinning, you are certainly not alone. Its history is as much a rollercoaster as its cryptocurrency value. 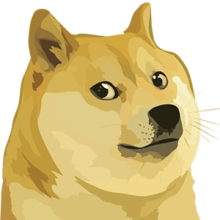 Back in 2013, the now infamous meme, featuring a lovable Shiba Inu dog named Kabosu whose inner monologue was riddled with grammatical and spelling errors, went viral and even won “top meme” of the year. Numerous iterations of the “Doge” meme—aptly named after the misspelling of “dog”— have since circulated the Internet, showing the dog in various situations and expressing a typically comical inner monologue replete with contradictions, self-deprecating humor, or other pop-culture references, coupled with the now familiar “doge” style of grammatical faults.

Because living in meme-infamy was not enough, in December 2013, software engineers Billy Markus and Jackson Palmer created a new cryptocurrency called “Dogecoin” as a joke in order to poke fun at the wild speculation of other cryptocurrencies. Although intended to be worthless, Dogecoin was designed as a peer-to-peer digital currency that could appeal to a broader demographic than the much larger Bitcoin. When Dogecoin first hit the trading market, it was valued at $0.00026 per coin, but in just 72 hours following its launch, its value jumped nearly 300% to $0.00095 per coin. While the coin’s value fluctuated over the years, much like its cryptocurrency counterparts, it absolutely skyrocketed in January and February of 2021 following encouraging tweets from Tesla-billionaire Elon Musk. In only 24 hours, the coin erupted 800% and was valued at $0.07 per coin. But its unexpected growth only continued throughout the spring of 2021 when the cryptocurrency hit $0.45 per coin on April 16. At the time, the cryptocurrency originally created as a joke was worth nearly $70 billion, making it the fifth-highest valued cryptocurrency. In early May 2021, Dogecoin hit a peak of $0.711 per coin, topping $80 billion.

And with this monumental value increase has come the monumental fight over who actually owns the “Dogecoin” brand, and thus, the exclusive rights to use it. Dogecoin’s creators formed a Colorado non-profit in 2014, fittingly named the Dogecoin Foundation, as the owner of the cryptocurrency. However, the Foundation did not file an application for DOGECOIN with the Trademark Office until August 2021. Unfortunately for them, by then nearly half a dozen other applications for DOGECOIN marks were pending with the Trademark Office, each of which is now contending for the rights to exclusively use the DOGECOIN trademark. These applications cover the expected “virtual currency financial services” (U.S. Serial No. 90/686,038) or “cryptocurrency services” (U.S. Serial No. 90/906,631), but also include alleged use with “costumes for use in role-playing games” (U.S. Serial No. 90/720,528) and “covers for smartphones” (U.S. Serial No. 90/625,748).

A Dogecoin Foundation board member lamented that, back in 2014, Dogecoin was always intended to be a joke, so they believed it was not worth registering with the USPTO. But with its meteoric rise, others saw an opportunity to monetize the brand beyond cryptocurrency trading. Now the question becomes—who actually owns rights in the trademark?

First are the issues of priority and abandonment. The Dogecoin Foundation went defunct for several years following its founding in 2014, and only recently relaunched in August 2021. Whether this is abandonment under the Lanham Act will depend on whether use was discontinued with an intent not to resume such use. But the Foundation has an uphill battle because three years of non-use is prima facie evidence of abandonment. And during the that period of non-use, Cook Islands-based company Moon Rabbit AngoZaibatsu LLC applied for DOGECOIN covering blockchain software goods in Class 9, and virtual currency services in Classes 36, 39, and 42 on an intent-to-use basis. Moon Rabbit’s founder claimed that, because the Dogecoin Foundation had gone dormant, it abandoned its use of the DOGECOIN trademark, and thus, Moon Rabbit’s open-source DOGECOIN code had rights to the mark. But the Dogecoin Foundation claims Moon Rabbit is “attempting to profit unfairly off of the goodwill Dogecoin has built,” to the Foundation’s economic detriment. In addition to Moon Rabbit, the Foundation is seeking to enforce its rights through cease and desist letters against numerous other entities, including Dogecoin 2.0, claiming priority to the trademark. The real legal fights over priority and who can prove exclusive and continuous rights in the trademark will occur when, and if, any of the DOGECOIN applications reach publication or maybe even in federal court.

But speaking of publication, it is unclear if any of these applications will reach that stage because the USPTO’s initial take is that DOGECOIN is descriptive. Many of the more recent applications have not yet been assigned to an examining attorney, but the first-filed application, dated February 3, 2021 for the DOGECOIN DEPOT mark, U.S. Serial No. 90/507,747, owned by a Colorado-based individual, may present as both an obstacle to and a warning case for all subsequently-filed applications. On September 2, 2021, the USPTO issued an Office Action requiring a disclaimer of the term DOGECOIN as it applies to financial services, stating that “purchasers who encounter the word DOGECOIN in connection with the identified services would immediately understand that applicant’s credit union services feature borrowing or repaying loans in cryptocurrency.” We will be watching to see if the applicant accepts the disclaimer or tries to fight against it, which could have far reaching implications for the rest of the Dogcoin pack regardless of how the applicant proceeds. In any case, the DOGECOIN DEPOT mark includes the additional term “DEPOT,” which was not part of the disclaimer requirement, so it will likely still be published for registration on the Principal Register, assuming the owner responds to the Office Action. At that point, we will not be surprised to see an opposition filed by the Foundation.

What started off as a joke has grown into a very real $80 billion dispute. And while it will likely take quite some time to sort out rights in the trademark, one thing is for sure: this dogfight will certainly provide excellent content for years of doge memes to come.

Things to Know About Dogecoin