Monero (XMR) has seen some decent rallies in recent days. However, the coin has failed to surge past a crucial supply zone, falling sharply from there. So, what is next for this popular privacy token? Well, some analysis to follow below but first, here are some highlights: 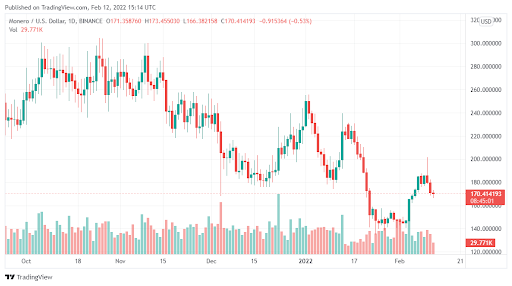 Monero (XMR) has had its ups and downs over the years. The coin has faced several regulatory issues and had to be delisted in some major exchanges. But this has not stopped the coin from truly surging.

After coming under severe selling pressure at the start of the year, XMR has recovered sharply. But bulls have struggled to take the price action above the $180 supply zone. As traders take profit at this zone, XMR has fallen sharply every time it has tested that threshold.

Is Monero (XRM) worth buying?

A lot of privacy tokens have come out in the last few years. But Monero (XMR) still ranks among the most successful ones. After hitting highs of $519 in May last year, XMR has failed to retest those levels again.

This downtrend gives dip buyers a perfect chance to get in. While it may take longer for XMR to return to $500, there is still enough upside to make good returns from the current price.