The general mood in the crypto market had started to change at the start of February. But increased geopolitical factors appear to be weighing down on sentiment right now. Despite this, the medium-term outlook for Internet Computer (ICP) is still bullish, and you will see why below. First, some highlights. 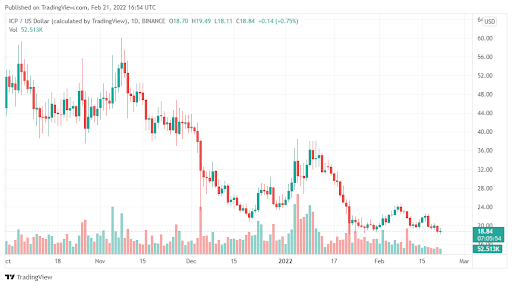 It is worth noting that Internet Computer (ICP) is a fairly new project, having launched in May 2021. But there was actually a lot of hype around it. In fact, ICP got immediate Coinbase and Binance listings. At one point during that craze, it traded for nearly $400.

But of course, hype eventually dies out, and as you would expect, ICP has crashed massively. It was trading at around $18.90 at press time. So, where does ICP actually go from here?

Well, the $100 mark is not as far-fetched as it sounds. After all, it was not long ago that ICP hit highs of $87 in 2021. Also, the $18 mark appears to be the lowest we have seen with ICP. There is a chance that once sentiment in the market improves, we will see a surge in the price action.

Who should buy Internet Computer (ICP)?

Internet Computer is a highly scalable general-purpose blockchain that hopes to be the go-to ecosystem for Web3 apps. It’s not even a year old and has the potential of blowing into another Ethereum.

So, if you are keen on buying smart contract alternatives to ETH, then you will find ICP quite decent. Besides, the fundamentals and the long-term outlook of this project are just incredible.