Home Market Axie Infinity (AXS) could bounce back by about 15% despite recent selling...


Axie Infinity (AXS) has seen some correction after surging quite impressively earlier this month. The coin has seen a 50% retracement of its price and is now looking well and truly in a bear market. But despite this, we still think there is real potential for a decent upside. Here are some highlights. 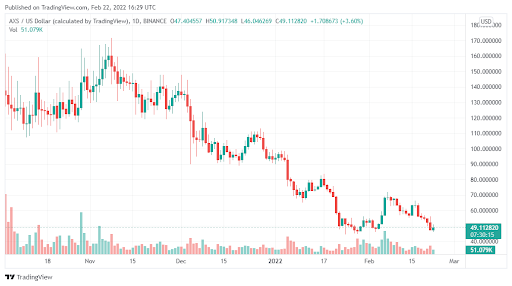 It was largely expected that at some point, the crypto market will pull back after surging in February. But much of the slump we are seeing right now has largely been triggered by geopolitical tensions in Europe.

Axie (AXS) has as a result, seen a 50% retracement from its early February highs. At the moment, the price action has been bouncing off between $45 and $48. We don’t think this will remain the case for long. In fact, we expect the coin to test its overhead resistance of $55 in the coming days.

This will represent an upswing of around 15% or thereabout. While we don’t see AXS reclaiming its February high of $72, bulls will try to consolidate above $55 before the next leg up.

Why you should put Axie Infinity (AXS) on your watchlist

Metaverse and blockchain gaming tokens delivered insane growth last year, Axie Infinity included. While most of these tokens have slowed this year as the broader market continues to struggle, the metaverse is one of the most exciting areas of the crypto-verse.

Besides, it’s just recently when AXS was trading at over $200. It’s not inconceivable that the coin may get there again.

Is Silvergate stock a buy after it suspended preferred stock dividend